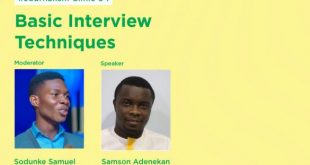 Adegoke Abisoye Elizabeth, a Mass Communication student of the Federal University Oye-Ekiti launched her brand, “SingingBee” on the 1st of May, 2021 at Testimony Hotel, Ilupeju Ekiti, Ekiti state.

The event, which had in attendance over 50 students of FUOYE, was also graced by some notable lecturers in FUOYE. They include Dr. Lawal Abiodun of the Psychology department; Dr. Sola Balogun of Theatre and Media Arts; and Dr. T.S Onayinka of the Mass Communication department.

“The third encounter I had with her was on my birthday. She just called me and I was wondering who owns the strange number. Then, she started singing for me. Oh my gosh! I felt like aww aww…,” an excited Bimbo, a student of FUOYE who attended the event, said.

With the slogan “Spreading Love, Joy, and Happiness,” SingingBee puts smiles on people’s faces and makes the world a happier place.

Their other services include video celebration packages; poetry packages; and special graphic design for loved ones.

Abisoye, while speaking at the event, described SingingBee to be not just an agency, but a ministry that spreads joy.

“We are in a world where we have so many challenges. We have something we are going through – pains that we can’t even share with others, sometimes. SingingBee is here to suit those pains,” she added.

John Praise Sobande, with stage name JP Sobande, is a 300 level Biochemistry student of the school, and a kingdom entertainer. After his performance at the event, he made his support for the concept behind SingingBee known.

“Spreading love, joy, and happiness is something we need much more in the world and it starts from me, you, and our families. The deepest need of any human is to be loved. SingingBee fills that gap by helping us appreciate our loved ones and like said, to make the world a better and happier place,” he explained.

He urged FUOYE students to maximize the presence of SingingBee beyond family members but with colleagues and friends.

“School is not only about certificate, but it is also about the network you build. Beyond family members, we can use SingingBee to appreciate our classmates, our colleagues, that person that helped with your assignment, the person you read with. It’s something they will never expect. So, when it comes, it’ll touch them to doing more for you,” he concluded.

In the atmosphere of the event were laughter, music performance, games, comedy and lots of item 7.