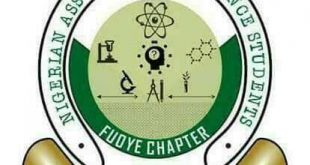 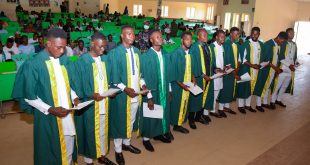 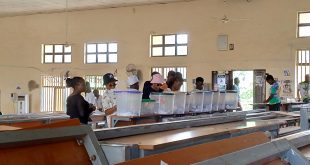 By Faith Omoniyi and Peace Ajala

On Wednesday, 30th of June, 2021, the National Association of Science Students, Federal University Oye-Ekiti chapter, held her elections in the New Faculty of Science Auditorium, Phase 2.

Present at the election was the Faculty adviser, Dr. Okoh; the electoral committee chairman, Comrade Otitonaiye; Mrs. Odigun who was representing the Chief Security Officer; the Speaker of the SSRC, Hon. Hassan; and the SSRC leader, Hon. Akinlade Josiah.

Before the commencement of the election, Mrs. Odigun addressed students on the need to adhere strictly to the election guidelines. He stated clearly that whosoever erred would face the wrath of the law.

The electoral committee chairman, Comr. Otitonaiye further stressed the need to make the electioneering process a seamless one to avoid a repeat of the last outcome.

The election which commenced at 9:55AM had a much better display and conduct by the electoral committee as newer adjustments were made for the electioneering process.

One polling unit was maintained but was completely maximized. Four doors of the polling unit were open to admitting and exiting students after they had exercised their franchise as compared to the 2 doors used in the last exercise.

To ensure that no student voted twice, students’ fingers were coloured in ink on their way out of the polling unit.

To avoid a repeat of students wearing out after waiting long hours in under the sun, tents were made available for them to lodge in.

Also, there was minimal contact between the students who were yet to vote and cadets officers. So there was no case of mishandling of students by the cadets as reported in the last election.

At about 2:59 pm, voting stopped. The electoral committee collated the votes and began counting.

Candidates for certain positions were unopposed. They include the offices of the Sports Director, Treasurer, and the office of the Assistant General Secretary.

Osamele Chuks from the department of Computer Science emerged victorious as the PRO with a landslide victory. He had a vote count of 1222, defeating his opponents Prosper Oserieme and Asaolu Ebenezer who had 453 and 303 votes respectively. 37 void votes were recorded in this category.

Odewamide Dolapo from the department of Biochemistry with 1123 votes, nicked a victory past Okafor Harford with 996 votes to emerge the Financial Secretary. 40 void votes were recorded in this category.

Abdulaziz Aminat from the department of Plant Science and Biotechnology emerged as the Welfare Director by defeating her opponent Daisi Oladimeji with 1254 votes to 887 votes. 26 void votes were recorded here.

The position of Librarian was won by Julius Biola who accumulated a total number of 833 votes, defeating his rivals Omotayo Tolulope and Olowoyeye Daniel who had 597 and 682 votes respectively. 40 void votes were counted for this position.

Sowade Oluwayinka conceded to Olarinde Okikiola for the position of Social Director. The formal had 988 votes while the latter had 1064 votes. They were 105 void votes in the category.

Mustapha Abiola from the department of Computer Science emerged as the treasurer unopposed. She garnered 1842 of the total votes cast. 359 void votes were recorded for this category.

The position of the Assistant General Secretary was also unopposed. Ajibade Bunkunmi from the Computer Science department emerged victorious with 1701 votes. 520 void votes were recorded in this category.

Adekunle Roqeeb from the department of Biochemistry also emerged unopposed as the Sports Director with a total number of 988 votes. 105 void votes were counted in this category.

Olasoji Odunayo from the department of Computer Science got ahead in the General secretary race with 878 votes defeating his closest rival Adeyemo Oluwaseye who had 751 votes. Ogundipe Michael came in third with a total number of 495 votes. 37 voids were recorded in this session.

For the position of Vice President, Adedigba Taiwo from the Biochemistry department came out on top accumulating 1309 of the total vote cast. Jimoh Gbenga and Omotosho Opeyemi were the other contestants for the post, they had 445 and 399 votes respectively. 26 void votes were recorded for this post.

Awopeju Moses of the department of Geology had a clean sweep of 1420 votes, defeating his opponent Akorede Ademola who had a total number of 715 votes to emerge as President of the Association. 17 void votes were recorded in this category.

Speaking with UCJ FUOYE, the newly-elected Vice President, Adedigba Taiwo said, “I am so excited, it was a big win. All thanks to God, all thanks to all supporters, stakeholders, and the entire students of the faculty of science for trusting and believing in me.”

“This election is a very credible election,” he added.

Babatunde Sunday, a 400 level student of Biochemistry said, “this is a more credible election than the previous one. Electorates exercised their franchise without any hindrance.”

“This election is the toughest in the history of the Faculty of Science, and also the largest population turn out. We have never experienced this kind of turnout,” said Comr. Otitonaiye, the electoral committee chairman.

“I would keep on saying it if what happened in the first election didn’t happen, our eyes might not be open to things like this. And it might even affect the coming SUG elections,” he added.

“The only delay we had was that of the sorting and counting. But overall it was a smooth election, I am thankful to God,” he concluded. 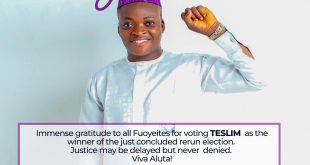 By Muktar Balogun The Federal University Oye-Ekiti has held the Student Union election on Tuesday, …